Longtime Key West attorney Albert Kelley, who is campaigning for Monroe County court judge, is the kind of guy who is just as happy hunkering down and reading a legal textbook as he is breezing through a John Lennon biography. Between his off-hours activities of writing local legal columns (“for fun,” he told Keys Weekly) and his work as an attorney and a magistrate, the man lives and breathes the law.

“It sounds weird, but when I was working toward medical school, I found I really enjoyed sitting down and reading about legal issues. Some lawyer friends kind of look at me strange when I say that,” he said with a laugh.

Since 2015, Kelley has been the magistrate for the 16th Judicial Circuit for Involuntary Cases. “‘Magistrate’ means ‘finder of facts,’” he said. “We listen to the evidence of a case, then evaluate and make recommendations for the judge.” He is often focused on cases regarding the Baker Act, under which people may be detained against their will for mental issues.

Kelley said he is passionate about educating the public when it comes to legal issues.

“The law should not be a mystery,” he said. “When judges don’t say why they’ve ruled against the people involved in a case, they’ve done a disservice. They leave the lawyers in a blind area. But the judges in the Keys here are fantastic — they have explained their rulings to me.”

If elected to county judge — the election is on Nov. 8 — Kelley promises to always tell plaintiffs and defendants why he ruled a certain way in their cases. “I promise to be fair, impartial and follow the law.”

He is not originally from the Keys. A military kid who was born in Bethesda, Maryland, Kelley and his family moved around the country a bit before settling in Fort Myers Beach, Florida, with his grandparents. In his early adulthood, when he wasn’t sky-diving or mountain climbing, Kelley kept busy by gathering degrees — he got an associate’s degree in general studies and a bachelor’s degree in political science before settling into law school. He’s also certified to be a paramedic through Tampa General Hospital, to boot.

During his time as an attorney, he has handled a wide range of cases. “Anything that could possibly appear to me as a judge, I probably have some experience in,” he said.

Kelley graduated with honors from Florida State University College of Law in 1989 after interning at the state attorney’s office in Lee County, where he prosecuted criminal cases. In 1989, he moved to Monroe County and worked in a four-lawyer firm, taking on criminal defense, family and civil cases. In 1995, he opened his office in Key West, where he specializes in business/contracts, landlord/tenant, small claims, collections, real estate, probate and foreclosure issues. In addition to adding the role as magistrate to his duties, in 2008, he was certified by the Florida supreme court to be a circuit civil mediator.

Kelley’s down time from his job (or, should we say, “jobs”) is currently occupied with campaigning. But when he can, he spends time with his wife of 30 years, Angie, two children, two grandchildren and two dogs. However, he’s just fine with campaigning. “I love meeting people and helping them understand the legal system,” he said. 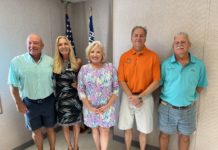