Last weekend, the Key West Conchs faced off against the Miami Killian Cougars, winning one game easily, and the other by a single run. Their postseason adventure started on May 3, with a 17-0 victory over the Sunset Knights.

The Conchs walked away from the April 29 game with an 11-1 victory in five innings.

Key West put the game out of reach in the third inning by scoring six runs.

Jacob Burnham started on the mound for the Conchs and gave up the only run Killian managed to score in the first inning on a sacrifice fly. Burnham continued to  pitch three more innings, giving up no hits and no walks, striking out four batters. The Conchs responded in the bottom of the first, tying the game on a sacrifice fly from Jack Haggard scoring Noah Burnham, who had singled early in the inning.

Miami Killian’s pitching was wild, hitting four Conchs with pitches starting in the second inning and walking seven Key West batters. Anden Rady collected his first hit-by-pitch as the first batter of the second inning. He would go on to score after Jose Perdigon doubled on a line drive to left field.

The Conchs’ bats got fired up in the bottom of the third. Haggard started the inning with a single, followed by a walk to Kai Smith. Rady singled to center field, scoring Haggard. Perdigon singled, scoring Smith. Jason Yarbrough walked, followed by a single from Anthony Lariz, which scored Rady.

Preston Herce homered on a ball to deep center, scoring three runs that brought the Conchs to six runs in the third inning. In the fourth inning, two Conch batters were hit by pitches, including Rady, who had to come out of the game after being hit in the face.

Killians’ pitching walked in the Conchs’ only run in the fourth inning. In the top of the fifth, Felix Ong came in to pitch and gave up a hit to start the inning, then came back to strike out consecutive batters.

Going into the bottom of the fifth, the Conchs needed two runs to end the game with a mercy rule, and that’s exactly what they got.

Herce started the inning with his second homer of the game to center field. The game ended after Smith singled to score Trevor Zuelch, putting the Conchs ahead by 10 runs. Herce led the way for the Conchs, totaling four runs batted in. Herce, Haggard, Perdigon and Lariz collected two hits each for the Conchs.

On April 30, the Conchs recognized their five seniors before the start of the game: Smith, Herce, Zuelch, Yarbrough and Billy Kight, who came in as a relief pitcher for the Conchs. Saturday night’s game was a high-scoring back and forth contest between the Conchs and the Cougars. Marlin Takovich started on the mound for the Conchs and lasted two innings after striking out three and giving up three hits and five runs, yet not a single one was earned. The runs started in the first inning, when the Cougars scored their first run of the game on a passed ball. The Conchs responded with four runs in the bottom of the first. Haggard gave the Conchs their first hit and run of the game when he doubled, scoring Herce. Killian walked in the next Conch run, followed by a single from Gabe Williams that scored two runs.

The Conchs gave up four runs in the top of the second, two of which came from a home run. The Conchs responded once again by scoring three runs on a collection of well-placed hits by Haggard, Smith and Sam Holland.

Heading into the bottom of the fourth, the Conchs were losing by one run and came out of the

inning tied after Herce scored on a wild pitch.

Ong continued to pitch through the fifth and sixth innings, not giving up a run until the top of the seventh. He tallied five strikeouts in 3.1 innings pitched.

Herce led off the bottom of the sixth. Getting hit by a pitch, he went on to score after Zuelch hit a

hard line drive to left field. A series of walks loaded the bases for Perdigon, who singled to score

Zuelch, giving the Conchs the cushion they needed going into the seventh. Haggard came in to close out the game for the Conchs in the middle of the seventh, striking out the last two batters of the game.

The Conchs took the hard-fought victory against the Cougars 10-9. The Conchs ended their regular season with two wins, sending them into the postseason at 19-6. Following their first postseason win over the Sunset Knights, their record improved to 20-6.

Caroline Smith is a junior at Key West High School and a varsity softball player, who covers sports for the Keys Weekly. 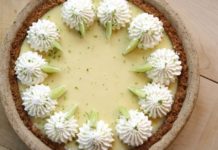