In the early morning hours of May 6, Pascal Weisberger and his dad, Ari Poholek, woke up early to watch a meteor shower from their home in Executive Bay in Islamorada.

The next morning, Weisberger, 14, passed away in a violent tragedy, and Poholek and the Keys community who have watched him grow up here have been rocked with grief since.

“I loved him,” Poholek told the Weekly from his hospital room in Miami.

“He was so cute. When he was born, I put my hand out, and he grabbed it and squeezed it,” Poholek said. “I remember looking down at this beautiful face smiling at me, and he held onto my finger, and I just thought, ‘I’m totally in love with this kid. He’s so beautiful.’”

Composed even in his grief, Poholek continued to look back on that special moment.

Weisberger spent the next 14 years of his life with that same wonder for the world, which Poholek lovingly nurtured.

“He had this thirst for knowledge, where he just wanted to know everything about things that interested him,” Poholek said. “And he never forgot anything. He just layered things and learned more and more.”

Weisberger devoured facts and could memorize by sight and sound. Everything he was interested in, he went “100 times further than needed” and eagerly shared his knowledge with everyone who wanted to listen, Poholek said. When he was assigned the role of Barack Obama in first grade, Weisberger memorized all the presidents’ names, their first ladies and when each was born and died. Poholek then spent years trying to arrange for Weisberger to meet his idol. Eventually, with some help from friends, some luck and Weisberger’s ability to spout off former first ladies’ birthdays and names to empathetic security guards, Poholek, Weisberger and his brother Daniel met and shook hands with Obama.

“I was ecstatic. It was one of the best moments of my life. The boys were gonna meet the president. They were so excited,” Poholek said.

Similarly, when the star scholar learned about geography, he memorized every state capital and 95 percent of country capitals. When he learned about marine debris pollution, he and his father organized community cleanups at Harry Harris Park where they lived. Those cleanups continue to this day.

In extracurriculars, Weisberger similarly excelled in his characteristically modest, soft-spoken way. In a year, he overcame a fear of putting his face in the water, and became “a little fish,” said Poholek. Weisberger took up running and proudly represented his school in the Special Olympics. He rose through the ranks in both the Boy Scouts and tae kwon do, putting in dedicated time and effort in both beloved activities. When he passed, Weisberger was on the cusp of earning his Eagle Scout rank and his black belt. Discussions are underway to try to award the former to him posthumously.

“Pascal always amazed me so much. I was proud of him all the time,” said Poholek. The grieving dad emphasized how impressed he was watching his son exceed expectations even in areas he hadn’t been able to do anything in at first.

Weisberger worked with occupational and speech therapists for years to overcome a stutter and become the engaged, caring citizen he was. Few people realized he was on the spectrum for autism.

“Pascal worked hard his entire life. He persevered and didn’t give up on himself and became a really wonderful human being,” said Poholek. “Everything that you and others find amazing about him, he developed because he was willing to push himself to be better than the cards he was dealt. He was a self-made kid, with a community of support who loved him.”

Weisberger’s intellectual curiosity and persevering spirit were surpassed perhaps only by his extraordinary kindness and strong commitment to helping others, many have noted since his passing.

“Ari was unstoppable when it came to taking care of the environment, and Pascal was his right-hand man,” said Boy Scouts friend Kathleen Pegues.

The dynamic duo are well known in the Upper Keys for their dedication to service. As co-scoutmaster for Boy Scout Troop 912, Poholek encouraged his son and other kids to engage regularly with the community, the environment and things that matter. They volunteered at community cleanups, animal rescues, the weekly God’s Kitchen meal at Burton Memorial United Methodist Church food pantry and environmental events, in addition to raising the flag at many veterans events.

Jessyne Peterson, a fellow troop mom, said, “Pascal shared and he cared. That is what he was all about. His heart was full of love and he wasn’t afraid to show it.” Peterson’s son Adrian called Weisberger “one of the kindest people he has ever known.”

Similarly, Aidan Austin, another scout, said, “Pascal spread kindness like wildfire. Not a single moment of my life will go by without me remembering him and his potential. I miss him.”

“His soul was perfect,” said Cindy Martin, the other scoutmaster for Troop 912. “How can this one child hold so much love, strength, integrity, morality, intelligence and kindness? How can he exist?”

In addition to his scout and scholastic endeavors, Weisberger volunteered with the Upper Keys Humane Society at least once a week for the last four years. Weisberger wanted to be a veterinarian, Poholek said. Animals were one of Weisberger’s true passions and interests, and he’d read to them, sweep, clean the cages and unfold newspaper for their bedding.

This week, the Upper Keys Humane Society announced it will name its lobby in Weisberger’s honor. A memorial plaque with his name will read: “We can judge the heart of a man by his treatment of animals. — Immanuel Kant.”

The honor is one of hundreds organized in Weisberger’s memory. Treasure Village Montessori Charter School (TVM) in Islamorada, where Weisberger was an eighth-grader, hosted the first Pascal Weisberger Day of Service on May 13, an event that will recur annually on Weisberger’s birthday as a reminder to do good things for the community, as Weisberger always did. Ocean Studies Charter School in Key Largo, Weisberger’s first school in the Keys, is considering dedicating its new science laboratory to Weisberger, Poholek said.

TVM principal Kelly Mangel said, “He wasn’t waiting for adulthood to change the world; he was already doing it.”

Mangel recalled that Weisberger was one of the few people who asked someone how they were doing in order to hear the response. “He’d ask about you, your family, your pets,” Mangel said. And unlike most, he would genuinely wait for an answer and respond with love and kindness.

“For the rest of my life I will try to emulate the skills he taught me and I will strive to be a better person in his honor,” a teary Mangel said.

Hearing the many tributes to his son, Poholek said Weisberger was an extraordinary kid, but also a regular kid. He never shied away from doing the hard things or the right things, but also loved to be outside, play with his friends, watch movies and learn new things.

“There were just so many things to be proud of,” said Poholek. “Pascal was the unique and impossible combo of someone who had intense empathy for others while still excelling at so many things himself, of never self-promoting and always putting others first in his thoughts and feelings, while still having so much intelligence and ability.”

Poholek circled back to that last starry morning on the dock of the Executive Bay Apartments with his son, their last one-on-one time together.

“We sat there in camp chairs at the dock at our place looking and looking,” said Poholek. “After 6 a.m., the light was streaming from the east, the dark was receding to the west and the full moon was setting very low to the horizon. Between the light and dark, there were three shining points of light, and I pointed them out to Pascal.”

The father and son sat there watching Mars, Saturn and Jupiter, when all of a sudden, a light shot across the front of the planets. Poholek described the shooting star “like someone took a paintbrush with silver and streaked it across the sky.” He added, “It left an imprint on my brain that I’ll never forget.”

Poholek said Weisberger, excited like always, hopped up and down saying, “I can’t believe it! Isn’t that so cool!” His dad was happy to see his son happy, and they watched the sunrise together.

“That was our last special moment,” Poholek said. “That’s what I’ll always remember — that special time getting up early before everyone else; sitting on the dock; looking at beautiful surroundings, beautiful sky and the combo of celestial events; and thinking how lucky we were to have seen that. And we were the only ones to see it. It was our meteor, the brightest we’d ever seen. And then it was gone.”

Donations to help Poholek honor his son and recover can be made on Facebook. 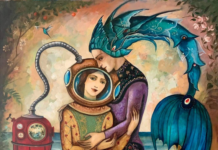