Lauren and her husband Brendon McAloon had never been to Key West when they decided to move here from New England.

“We made the decision, literally, by flipping a coin,” McAloon, a sculptor, said the other day in her second-floor studio at The Studios of Key West, 600 White St. “We couldn’t decide if we wanted to move to New Orleans or Key West. We’d visited New Orleans a number of times, but had never been to Key West before.”

Today, along with sculpting, McAloon is the facilities manager at The Studios of Key West. If you stop by the Studios and run into McAloon, you might recognize her as the “fish monger” from the former Overseas Market. Both Lauren and Brendan got jobs there when they arrived in Key West and worked there until it closed.

“I don’t know if that’s an official title,” she said and laughed. “But’s that what I was called because I worked in the seafood department.”

Today, she divides her workday between early and late hours in her second-floor studio working on one of three or four sculptures that are works-in-progress, and her day job as facilities manager at The Studios of West, a job she’s held since the Studios opened in 2007.

McAloon didn’t get her own studio at the Armory for two years. (The Studios’ White Street location is called the Armory because the building is an old military armory at the corner of White and Southard streets.) She said her job didn’t get her request moved to the top of the list.

“I did my sculpture work in the house, wherever I could find space, before I got my studio. I used the porch and living room a lot,” she said.

McAloon likes her studio for many reasons, but one is that she can stop work for the day and not take away from her creative time to put things away, as she often had to at home.

“I like three-dimensional,” she said when asked why she’d become a sculptor. “Putting my hands on the work, getting them dirty.” McAloon smiled. “Seeing the object take shape. I like the balance as the piece takes shape, when it’s right.”

Ideas come to her all the time.

“Where do my ideas come from?” McAloon looked around her studios, eyeing pieces of works-in-progress. “Hard to answer. Some seem to surface when I see something that interests me. It isn’t as if I’m knocked over with the idea. It nibbles at me, over time. The idea usually takes shape in my mind first. Then I might sketch it out before I begin work.”

On some of her projects, she even makes models to see a scaled down version of her idea.

Each piece she works on has its own time schedule and it varies.

“I’ve taken five years to complete a piece,” she said. “I sometimes look at a work-in-progress and, I don’t know, I don’t feel right about it and let it rest. That’s why I’ve always got more than one project going.”

Most of her pieces take less time, she said.

“Sometimes, for me to feel right about a project, it just takes time for it all to come together,” she said. “Now that I’ve got the studio, when it doesn’t feel right, I can put it in the corner and go on with something else.”

McAloon’s bigger sculptures have been displayed during what began as Art in the Park and is now called Sculptor Key West.

About the coin toss, is she happy with the results?

“Oh yes,” she said. “Key West allows people to change. The art community in Key West is unbelievable. I’ve been accepted into a great caring and giving community. For such a small island, the art community, be it artists or patrons, is large and supportive.” 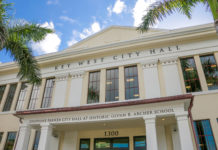 KEY WEST TO LOSE LONGTIME STAFFERS TO RETIREMENT IN 2023