All parks and beaches in the village of Islamorada are shutting down beginning Friday until further notice. People will still be able to use Founders Park facilities, however, so long as they’re in small groups no bigger than 10.

Just after 4 p.m. on Thursday, the village announced that all beaches and village parks, including Anne’s Beach and Library Park Beach will be closing down. As for Founders Park, individuals and small groups will still be able to use basketball, tennis, pickleball courts, as well as fields and walking trails.

“With the announced closures of most public places by Miami-Dade Mayor Carlos Gimenez today, it was prudent that the village take the proactive steps to diminish the possibilities of an influx of a population that has the highest rate of COVID-19 positive results in the entire state,” Mayor Mike Forster told the Weekly on Thursday.

All restroom facilities at parks and beaches are closed. The dog park is also closed. Plantation Yacht Harbor Marina Boat Ramp and fuel docks are closed to all but marina residents. No new vessels will be admitted to the marina.

Public access to the village Administrative Center will be limited beginning Friday, March 20 until further notice. The lobbies will be open for customers to drop off permits, applications, other documents.

The public is asked to submit payments online during this time, but payments will be accepted in a drop box at the cashier window. No in-person meetings will be held. Conference calls and email correspondence will be utilized to maintain services. 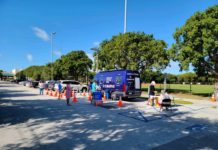