A disturbing report has recently been published concerning the iconic monarch butterfly. Tragically, their population is dwindling at an alarming rate. Known for its iridescent orange and black tiger like markings, the monarch is a familiar sight along both east and west coasts of the United States. The Xerces Society for Invertebrate Conservation, a nonprofit group, studies their over-winter migration to California every Thanksgiving and observed there was an 86 percent decline from 2017 to 2018. Using 97 counting sites, Xerces volunteers registered 148,000 monarchs in 2017, which dropped to an estimated 20,456 in 2018. This is on top of the decline over the past three decades when 4.5 million were registered in the ’80s. Xerces worries the monarch is reaching “quasi-extinction” for North America.

“It’s the small things that suffer and go unnoticed,” said Sam Trophia, founder of Key West’s #1 tourist attraction, The Key West Butterfly and Nature Conservatory and creator of The Trophia Butterfly Foundation. Trophia has studied monarchs since he was 7 years old and has visited one of their protected over-winter migration sites in Mexico’s Oyamel Fir Forest. “It was fifty acres in the ’70s, and now it’s dropped to just a few. I didn’t know the scope until I could see the beauty and the majesty ” According to the World Wildlife Federation, in the ’90s, monarchs occupied roughly 45 acres in all of Mexico—down to 1.66 acres in 2013—but conversely rose to 6.12 acres in 2017. Still, their population isn’t as nearly as strong as it used to be.

Trophia echoes the Xerces assertion that a decrease of farmland habitats, as well as climate change and increased pesticide use, have all been factors in eliminating the milkweed plant vital to the monarch on both coasts. Milkweed is a food source for monarch caterpillars and also where the butterflies lay their eggs. “Remember when they used to cut the grass on the side of the road? Now they just spray pesticides to kill it and that kills the milkweed, ” said Trophia.

California’s recent historic drought and wildfires have also played a major role in reducing air quality and decimating milkweed for the western monarch.

Another threat is the proposed border wall between Mexico and the United States. For example, the 100 acre National Butterfly Center in Mission, Texas occupies land the wall would cut through, which would directly affect its ecosystem. A wall would stop valuable animals and plants from thriving and would disrupt the landscape for more than 240 different species of butterflies that inhabit the Center. As pollinators, a decrease in butterflies would affect plants and flower growth as well. According to Trophia, the monarch travels through Texas after becoming sexually mature in Mexico (okay, there is a joke in there) to lay their eggs. Again, if the milkweed is disturbed or destroyed, then monarch numbers will likely fall.

“There is always hope that people will realize what’s happening and begin to protect them,” continued Trophia. On a positive note, he saw an “inundation” of eastern monarchs this year in North Carolina en route to Mexico. Xerces expects the Mexico numbers to be relatively positive this year but the fact remains there has been an estimated 80 percent decline of eastern monarchs since the mid-1990s.

For now, the focus is on milkweed restoration on both coasts. The Key West Butterfly and Nature Conservatory offers milkweed seed packets for everyone to plant. As Trophia said, it’s the little things that make a difference.

Trophia is also concerned with the declining giant swallowtail butterfly, as the numbers are down in the Keys and each butterfly pupa costs $3. He will be fundraising through the TrophiaButterflyFoundation.org and concentrating efforts to save the swallowtail as well. While it may seem like a minor issue, declining numbers of butterflies negatively impact pollination, harming plant growth and ultimately damaging our delicate eco system.

Go to the TrophiaButterflyFoundation.org or The Key West Butterfly and Nature Conservatory to learn more about butterfly conservation. 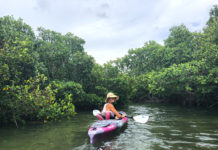