Another school athletics year is underway in the Florida Keys. Fall athletes are taking to the fields and courts for practice in anticipation for the season’s beginning.

Baseball is still months away, but a new program in the Upper Keys is setting out to develop player skills and team success during the offseason. It’s also aiming to create a baseball experience unlike any other for players and their families in the Keys.

Last baseball season saw a young Coral Shores team with new coaches in Joe Molinaro, Doug Mientkiewicz and Paul Vargo. With the season’s end came the realization that an offseason program could benefit not only current high schoolers, but also younger players and future teams.

Then came the birth of Steady Bats by the Upper Keys Baseball Development Foundation.  Born in 2021, the new program is dedicating time and energy to enhance the abilities of youth baseball players in the area. The focus is fundamentals to improve skill levels for players ages 10 to 18.

Steady Bats came about in collaboration between Molinaro, Mientkiewicz and Vargo’s unified vision to bring quality baseball training to the Upper Keys youth throughout the year.

Kicking off in June, around 25 players from the high school level on down are routinely throwing, taking ground balls, learning base running and swinging. Held Monday and Thursday evenings at the baseball field at Founders Park, Molinaro said the program’s keeping players’ skills and development going in an upward direction.

“It’s been very successful and very positive,” Molinaro said. “I think we managed to come up with a really good program for them to work. It’s really helping keep baseball going in the offseason.”

Through Steady Bats, benefits include coaching from a Major League Baseball World Series champion and Olympic goal medal winner in Mientkiewicz. Following his baseball career, Mientkiewicz went on to become the hitting coach with the Los Angeles Dodgers organization. He also became manager of the Minnesota Twins’ affiliates in the Single-A Fort Myers Miracle and Double-A Chattanooga Lookouts. His most recent managing job was in 2017 with the Detroit Tigers’ Triple -affiliate Toledo Mud Hens.

“We are pretty much starting this from scratch,” Mientkiewicz said. “We are trying to change the culture here and we feel that by doing things like this, we will not only keep the kids playing who love baseball, but also give the ones on the fence an opportunity to learn fundamentals moving forward.”

Not only are they obtaining top-level instruction, but Molinaro said younger players are also gaining exposure around varsity talent on the big field.

“I don’t think players had this before, especially with a major league coach,” he continued. “I think that the exposure and experience they’re getting is top notch.”

In addition to developing player skills, the Upper Keys Baseball Development Foundation is also seeking community support to enhance the baseball experience throughout the region. Molinaro said they’d love to create a park atmosphere where baseball players from the Keys and beyond could enjoy.

“We’d love to get astroturf on the field, as well as screens and a press box,” he said.

“By focusing on these outcomes, we are able to accommodate a range of players no matter their level of play,” reads Steady Bats’ philosophy. “Our student players include everyone from the casual player to the highly motivated and talented learner who dreams of an NCAA scholarship and beyond.”

Those wishing to volunteer their time or donate to Steady Bats can visitsteadybats.org. 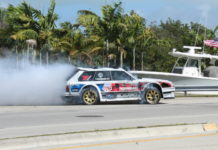