Let’s add “READ MORE” to your list of New Year’s Resolutions!  You can start with these three superb recently released and upcoming books about sailing. Anchors Aweigh!

Henley Evans has been marketing manager for a cruise line that offers exciting sea expeditions throughout the world. No one in the office exerts more energy or puts in longer hours. Her nemesis Graeme works remotely, replies to emails in obnoxious one-word responses and has recently become a little too friendly with her male chauvinist boss James. While Henley and Graeme battle for the coveted director position, their boss decides to send the duo on a Galapagos cruise to brainstorm a genius campaign and winner takes all. Henley is out for blood, prepared to sink her competitor’s ship, but when she finally lays eyes on this gorgeous hunk in person, all her icy resolve melts away. As hard as Henley tries she cannot resist this charming foe. Through a series of laugh-out-loud mishaps and oceans of steamy chemistry, the young marketing gurus make the most of this exhilarating adventure and unexpectedly figure out the complicated truth. Pack your bags and dive in with this delightful romantic comedy!

The Titanic Sisters
By Patricia Falvey

In the green pastures of Ireland sits the charming town of Donegal. The Sweeney family lives on a small farm, working their fingers to the bone. Nora and Delia are sisters as different as the sun and the moon. Nora is spoiled by her beauty and mother’s attentions, expecting all the local boys to fall at her feet. Delia struggles with a stutter and often helps her hardworking Da on the farm. Incredibly shy, she finds solace in reading books. When a distant cousin passes, an opportunity to go to America presents itself. Nora will have the coveted position of governess to a wealthy man’s child and Delia is to be a maidservant at another home. Desperate to start new lives, they board the Titanic to cross the ocean. On April 12, 1912 they face circumstances they could never have imagined. Believing that Nora did not survive, Delia accepts the governess position in her place. She quickly becomes attached to the beautiful child called Lily and fancies the sudden chemistry between herself and her new employer, the handsome Aidan O’Hanlon. When it’s revealed that Nora survived, Delia has a sinking feeling that everything she treasures is at risk. Family secrets and revenge make this inspired historical fiction a voyage you will never forget.

Anna waits tables at a pirate-themed bar in Fort Lauderdale. She has spent the last year in a haze as she grieves the inconceivable loss of her fiancé and the life they charted. The sailboat they painstakingly refurbished sits idly at the dock, filled with memories of Ben. As the day for their would-be maiden voyage approaches, Anna decides to take her chances going solo and sets off toward the Bahamas. After an arduous first night at sea, Anna accepts that she cannot complete the planned journey without assistance. She searches for an experienced sailor to get her to Puerto Rico and through the Caribbean. That is when she meets Keane, a gorgeous Irishman who fits the bill and more. Following Ben’s original itinerary, Keane and Anna work well together and they both learn much more about themselves than ever expected. Simply adored this romantic sea escape filled with breathtaking sunsets, dolphins and hidden treasure. DATING IN THE KEYS: POPULAR SPOTS LOCALS MEET THEIR SPECIAL SOMEONE 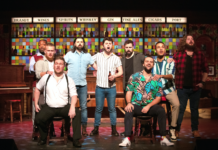 THE ISLAND ASTROLOGER: THERE’S PURPOSE IN THE IRRATIONAL IN PICTURES: GIRLS NIGHT OUT IN KEY WEST