Just before a huge cruise ship left a trail of mud a mile long and 300 yards wide coming into Pier B, John Wells again spewed his own invective against our hard-working public servants on the city commission. Why he can’t defend his lucrative job without slamming the complex discussions about the future of cruise ships coming here, calling them “warm air” with “little said,” and sneering at our mayor for not taking a “meaningful leadership role,” I can only deduce it is because his own hot air is the only energy he can bring to the discussion.

Mr. Wells thinks he has brilliantly discovered an obscure law that, surprise, renders our proposed city ordinances restricting cruise ships “unlawful” because FS 311.15 says “Un-unhh,” and Mr Wells is the first to proudly enter this gem of a legal discovery into the debate.

Oh, dear John. I was sensible enough to grant the cruise shippers credit for a clever, though hugely expensive end-around by passing FS 311.15 after they dropped their lawsuit against the city — because they knew they would lose the lawsuit. Even more expensive than a lawsuit is encouraging our legislators to perform tricks like passing and not vetoing screw-the-people laws is to contribute beaucoup bucks to those in Tallahassee with the power to accept and spend the $1 million in a way that keeps the cruise money flowing to a tiny rich group of harbor pilots (e.g., Mr. Wells) and hoteliers (the owners of Pier B).

Well done, miscreants, I said. But I actually read, with my lawlerly eyes, the statute. It forbids “a ballot referendum” from restricting cruise ships.  But what has been going on these past months is NOT simply trying to pass the referendums into law, which would have taken five minutes, and which indeed would have been in violation of FS 311.15. Instead, actually reading the statute led our commissioners to create their own ordinance to accomplish the will of the people by using NOT the referendums themselves, but rather the SCIENTIFIC FACTS uncovered during a year of public debate, and which are the animating sources of  the new, reef-saving ordinances up for review.  Even our cleverest Florida legislators have not yet banned municipalities from using science and common sense to make laws.

Now the last time I had to correct Mr. Wells’ errors in the Keys Weekly, it was his assertion that Safer Cleaner Ships, and thus the whole city commission, had NO scientific basis for taking into account all of the damage to the water and public health outcomes caused by cruise ships. Mr. Wells has not denied my corrections based on the 11 peer-reviewed scientific papers analyzing such damages.  Thus Mr. Wells is not using the generous amount of expensive newspaper space granted by the Keys Weekly to publicly debate his and my assertions. So why should he then be the man “open to participating” in a discussion, and, oh yes, according to conditions he unilaterally sets?

Mr. Wells, before you take your snide “wind-jamming” style of discourse up the ladder to a delaying-tactic “negotiated settlement,” at least have the gumption to debate me, here, from the comfort of our computers. Let’s save taxpayer money for our city attorney and his staff’s time on the lawsuit, which Pier B will undoubtedly file and even more surely lose, during which time we will enjoy more blessed months and years without the silt explosions created by Serenade of the Seas last Tuesday when they were dropping off a sick passenger. For winning the lawsuit we can collect legal fees, meaning Pier B would be covering our city attorney’s office for a while, a nice contribution to lowering my taxes here.

Finally, I apologize to the Keys Weekly readers for being as nasty in print to Mr. Wells as he has been to Safer Cleaner Ships, the majority of citizens who voted in our referendums, and our commissioners, especially Mayor Johnston, with whom it seems he has therapeutic issues. If he becomes gentlemanly, I promise to be so as well. 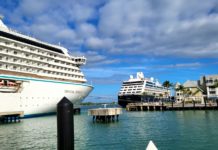