To mangle Charles Dickens: “It was the worst of times, and the best of times.” The worst because it was a record-breaking hurricane season. The best, because the Keys went largely unscathed.

Even before the season started, folks were jittery for a good reason — hurricane shelters and coronavirus don’t play well together.

“We’ve been telling people that they are safer at home and to isolate and to stay away from people,” said Frank Rollason, Miami-Dade’s emergency management director. If a hurricane was to approach Florida, the message would change totally. “We are going to be telling people that this impending peril is more imminently dangerous and that you have to move.”

The comments came before the official start of the hurricane season … and so did the storms. Tropical storms Arthur and Bertha formed before June 1.

It was an incredible season — the most active on record. There were 31 subtropical cyclones, of which 30 were named. Of the 30 named storms, 13 turned into hurricanes and six major hurricanes. It was the only the second season on record when, having run out of regular names, officials resorted to using the Greek letter storm naming system. And of those Greek storms, Eta would cause the most damage in the Florida Keys when it crossed the Upper Keys on Nov. 9.

Winds exceeded 60 mph and brought down large limbs and debris onto homes and roads in Key Largo. Eta’s wicked winds even resulted in several trees crashing down onto homes, including one on Transylvania Avenue where Dylan Deese and his dog, Aries, were at the time. He was enjoying what he calls a “normal Sunday night” watching a movie on his couch when he saw a tree “coming through the door.” Then his roof came down and pinned him under debris for a minute. Deese received 13 staples on his head from the incident. His home was destroyed.

According to Jon Rizzo of the National Weather Service’s Key West office, the highest wind gust was 71 mph, recorded at the Carysfort Lighthouse, just east of Key Largo. Another unofficial report of a 58 mph wind gust was recorded at Rock Harbor. According to the weather service, the eye of Tropical Storm Eta moved across Lower Matecumbe at 11 p.m.

The worst flooding occurred in the Upper Keys on the Oceanside, as well as Barnes and Card Sounds and Blackwater Sound.

The rest of the Florida Keys experienced Tropical Storm Eta very differently. Like Rizzo predicted before the storm made landfall, the heaviest rains and winds were on the outer edges of the storm. As it passed over the Middle Keys, a hole opened up with little wind or rain.

“The winds were weaker on the south side of the system, as well as near the center,” Rizzo said. “A few thousand feet up, the winds were blowing 30 to 40 mph, but it needs strong showers and squalls to get the wind” on the ground. “We also had sprinkles and drizzle in the Middle and Lower Keys, while the Upper Keys experienced strong showers and lightning strikes. In fact, (mainland) South Florida’s rain totals were much higher — in the double digits.”

Oh, but poor Louisiana. It had five direct hits.

— Hurricane Zeta made landfall on Oct. 27 in Cocodrie, Louisiana with sustained winds of 11o mph.

Aside from Tropical Storm Eta, the storms with the closest approaches to the Keys were Isais in late July and Laura in early September. 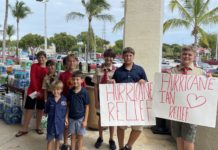