Maryland-born Jon Rizzo has been the warning coordination meteorologist with the National Weather Service out of Key West since 1999. With Hurricane Irene coming through that same year, he got experience working on tropical storms immediately. Though that storm didn’t cause an enormous amount of damage, he has certainly cut his teeth through devastating storms like Hurricane Wilma in 2005 and Hurricane Irma in 2017.

Since then, Rizzo said there’s been improvements in forecasting technology and a notable change this year to storm naming. And with more people watching storms closely as they form, Rizzo said Florida Keys locals have several reliable information hubs for advice and information in advance of a storm.

The naming system for hurricanes will be a little different this year, according to Rizzo. Traditionally, in a system overseen by the World Meteorological Organization, lists of male and female names were used in a six-year rotation for Atlantic hurricanes. In the event of a notoriously devastating storm, the name is retired. An active storm season may exhaust all names on the list, prompting the recent use of Greek letters to name storms. But not anymore.

“We’re going to have a seventh list of storm names on standby, should we ever run out,” explained Rizzo. “That’s our reserve tank that will allow us to retire a storm of notoriety, because you can’t retire a Greek letter. The Greek system will no longer be used.”

As for storm modeling, Rizzo said there’s been some improvements this year between upgrades to the global forecasting system and more layers of improved physics for data collection.

“This allows for improved hurricane formation forecasting with longer lead times to see systems further in advance,” he said. “We also have faster computers that can run more complex forecast models, which would lead to improved forecasts of developing hurricanes.”

Residents are often frustrated by the overwhelming differences among the so-called “spaghetti plots” that show colorful, wavy lines of various storm track predictions. Forecast models include the American, European and Canadian models, among others. Rizzo emphasizes that the National Weather Service takes all models into account when making predictions — unlike many locals who fiercely pin their hopes on whichever line is farthest from their home.

“We work with the National Hurricane Center, and they review all the model output to produce the best possible forecast. A lot of people like to look at the spaghetti plots and say, ‘What’s the best model?’ It’s the Hurricane Center’s job to review those models, and that input is used to produce the official forecast and the cone.

“We often get asked, ‘But this model is saying it’s going in a different direction?’ To borrow a phrase from a spaghetti sauce commercial, ‘It’s in there,’” Rizzo continued. “The European model is in the mix, which in turn leads us to more confidently predict impacts.”

What’s the best online source for storm forecasts? Rizzo highly recommends hurricanes.gov. “It takes you directly to National Hurricane Center’s forecast,” he said. The National Weather Service also shares the latest forecast on Facebook and Twitter @NWSKeyWest — for those tracking a storm on their phone while standing in line at Publix to buy bottled water.

“For the past 10 years, we’ve had a tropical system form prior to June 1. Now we’re starting the engine running a little earlier. This does not mean the storm season start has changed to May 15 — it’s still June 1. But it’s possible that in the future, hurricane season in the Atlantic and Caribbean will start earlier.”

And finally, Rizzo wants to remind everyone that preparation is key to hurricane resilience: Have an evacuation plan and hurricane supplies, and be prepared before hurricane season starts.

“Weather.gov/safety/hurricane offers a checklist of things you need to consider,” he said. 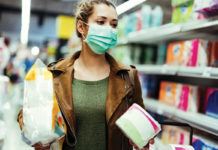