Editor’s Note: This is the first in a series of stories featuring locals who need help this holiday season. In 2017, following Hurricane Irma, the need is greater than ever. They are stories that tug at heartstrings; and locals and visitors can help in meaningful ways. Their identities have been concealed to maintain the dignity and privacy of the givers and the givees.

The act of giving without the expectation of something in return is the true definition of kindness.

Imagine being a single mom of three children, ages 9 to 14. Imagine a hurricane named Irma. Imagine having your possessions reduced from a household to a small stack in a friend’s garage. Imagine losing your place to live, finding a small guesthouse through the generosity of friends. Imagine trying to rebuild an entire life.

The Keys Weekly learned of a 36-year-old Marathon woman who needs help with life’s essentials. Not luxuries, essentials. For example, she has two twin mattresses but needs a bunk bed to put them in. She has a queen bed frame, but no mattress.

The Marathon High School graduate (2002)) was living in Grassy Key in a home being renovated when Hurricane Irma hit. Tragically, the vast majority of their possessions were being stored on the main floor. After they were able to return to the Keys, they spent three agonizing weekends going through their belongings and chucking most of them.

“I’m kind of glad that my kids are a little bit older,” she said. “They are humble and resilient. These are good kids.”

With the help of her mom and her best friend, she’s cobbled together a sort of mashed up lifestyle. She’s working two jobs and already has saved up the down payment on a two-bedroom rental home — as soon as she can find one.

“When I moved back to the Keys the housing crisis was already happening, and now …” she trailed off, with a wry smile.

She gets a distant look in her eye and smile on her face when she talks about her children. Her oldest, at 14, is a good student. She needs a laptop sooner rather than later. She loves cheerleading and is a budding Francophile (a lover of all things French). Her middle child, a boy, “probably lost the most.” All of his sporting equipment was rusted beyond repair — a bike, skateboard, and something called a “green machine.” Her youngest lost all of her stuffed animals and her prized collection of Judy Moody books.

This year, the mom and kids are content with a tabletop Christmas tree. They are waiting on the new rental, remember, and think it would be too hard to move a full-sized holiday decoration. They need other basics, too, like a crockpot to replace the one that rusted, and new wooden spoons.

“Some of our things that were in the boxes on top were okay,” she said. “Other times I’d pick up a box and it would just fall apart in my hands.”

Presents in Paradise, a 15-year local organization (see sidebar), is helping to coordinate a bright holiday for this family.

Though 15 years old, Presents in Paradise isn’t officially a nonprofit as it still awaits its formal 501(c)(3) designation from the Internal Revenue Service. That doesn’t stop it, however, from doing good works.

“We are way about stealth,” said spokesperson Sarah Brawer. This year, she said, has been especially tough. People who normally help the organization are in need of help themselves. Suggesting that, though, is traumatic for both sides.

“I called this one woman and we just both broke down in tears,” Brawer said. “She’s a Big Pine Key resident temporarily living in Marathon going through various circles of hell while officials and insurance people decide whether her home is habitable or uninhabitable.”

In normal years, this charity is all about the children, especially those who “fall through the cracks.” Presents in Paradise actively seeks out families that might not be served by other good works campaigns. Or, perhaps, supplementing the help. This year it is focusing on the needy between Marathon and Sugarloaf.

Most often, the elves take specific lists to shop for specific children. Volunteers are needed, as two of its most active members have suffered “hurricane injuries.” Presents in Paradise can be reached by calling 305-304-6794. It also has an account at First State Bank that residents can deposit funds into, and a box set up at The UPS Store. 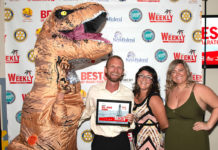