For the first time in a long time, something remarkable happened in Key West this week. After 17 months, a cruise ship entered Key West Harbor. The goal of the call was to discharge a passenger critically in need of advanced medical care. It was an important operation that revealed notable information about our port.

First, the maritime operation, devised necessarily in short order, was successful because the infrastructure of Key West’s maritime community remains intact and functioning. The operation was a joint effort by the U.S. Coast Guard, Royal Caribbean Cruise Line, Key West Bar Pilots, Pier B and Caribe Nautical. All of our protocols remained in place after many months, and we can all be proud that the patient was given a chance at continued life. As always, excellent shoreside support was provided by KWPD and the emergency medical crews.

Secondly, it is remarkable that no part whatsoever was played by the city of Key West administrators. “Touch-and-go” emergency operations, not uncommon events when passenger ships are passing near Key West, normally occur at the Navy Mole as there is more room to maneuver emergency vehicles. The city holds the lease to dock ships at the Mole. However, recent endemic hostility of city officials to cruise ships made that option problematic, so we chose Pier B as the focus of the operation. It is deplorable indeed that the city’s indifference to port operations resulted in the commission allowing Safer Cleaner Ships to regulate port management over the past year. The problem, of course, is that the city’s negligence has brought itself dangerously close to becoming irrelevant to these important matters.

Finally, the true nature of the Safer Cleaner Ships (SCS) fanatics was exposed to our community and beyond. Ever since humans began to sail the seas, it has been an unwritten law that any vessel or mariner needing safe harbor and succor would be accommodated unreservedly. That is true across the entire globe — from Zanzibar to Wonsan, Perth to Piraeus — all endangered sea travelers receive aid without question. Except in Key West.

The actions of some of the Safer Cleaner Ships supporters, including but not limited to, screaming on VHF radio to the Serenade of the Seas that they were not welcome and should leave immediately, signal that the group is at least partially populated by unhinged louts. In one act of ignorance, the hooligans put Key West below even North Korea in the scale of welcoming seaports. The appalling behaviors were exacerbated by SCS directors failing to condemn the miscreants in their midst. It is the SCS history of false rhetoric and emotional hyperbole that has instigated a spate of violent threats, stated and implied, against tourists on their Facebook page.  SCS is nothing less than the local chapter of the Cancel Culture that is coarsening our society.

The new SCS strategy to ban cruise ships is moving to this ugly tactic. They have failed to prove their environmental damage claims, they have triggered state intervention into our local affairs, their legal statements have proven flimsy, their incessant lies have been exposed, and they have endangered the city’s well-being by exposing it to debilitating litigation. As their failures become more obvious to commissioners, the SCS leaders are becoming irrelevant. Therefore, their tactics are changing to make Key West so unfriendly, so grotesquely undesirable as a place to visit, that cruise tourists and others will turn away. They have publicly stated exactly that.

Though the transit of the Serenade of the Seas was a victory for Key West, it was tarnished by Safer Cleaner Ships.

Nevertheless, this week’s events present a timely opportunity for city commissioners to retrieve their historical role in port management. Already, there are plans for formal negotiations to address the issue – anathema to the egoist SCS leaders. All that is needed is for four politically courageous commissioners to pass a resolution that will return the people’s commission to a true port authority, in defiance of the mayor and her SCS handlers. 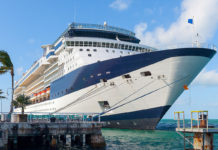