Keys customers with newer Apple products will soon have the ability to avoid a mainland road trip for device repairs at the nearest Apple store. The question is: should they?

Apple has long been notorious for making it difficult to service their products outside of a closed ecosystem of repair technicians. For years, most devices could effectively only be serviced by Apple itself, through either retail stores or mail-in repair services.

Though independent technicians still provided repairs outside of Apple’s approved network, these repairs were rarely able to use genuine Apple parts, and most services performed by third-party technicians would void warranties and prevent Apple “geniuses” from servicing a device over the remainder of its life.

However, the company’s recent efforts have expanded access to the parts, tools and training necessary to service their devices. In 2019, the Independent Repair Provider program enabled individual repair shops to service Apple products, eventually adding more than 2,800 providers to a network of 5,000 established Apple authorized service providers.

Still, consumers desired the ability to service their own products. “Right to repair” legislation, enabling consumers to repair their devices through a store or technician of their choosing, has gained heavy momentum as customers fight back against “planned obsolescence” in older devices. The new Self Service Repair program seems to be a concession to these demands.

Although the new program puts the power in the hands of consumers (and may be a boon for former Apple technicians looking to make some cash on the side), many caution strongly against the dangers of self-taught electronics surgery.

“To me, it’s a joke,” said Victor Figueroa, owner of Keys Smartphone Repair. “The average person cannot do this. It’s taken me years to learn and get good at. In the beginning it cost me a lot of money, and I screwed up some phones and had to buy new ones.”

Figueroa particularly pointed to lithium-ion battery replacements as cause for concern. “The batteries are very, very dangerous,” he said, explaining that puncturing the old batteries from the poking and prodding during the removal process is extremely hazardous. “I’ve had someone come in here with their hair burned off their face because they accidentally stabbed the battery,” said Figueroa. “In the forums I’m a part of, we’re all laughing at it. There’s so much that can go wrong.”

Figueroa isn’t lying, and part of Apple’s former hesitancy to service devices after they have been touched by non-authorized technicians is well-founded. This reporter has personally watched a friend’s phone spontaneously combust in his hand after improper installation of a replacement battery.

Apple cautions most inexperienced consumers against attempting repairs, stating that, “Self Service Repair is intended for individual technicians with the knowledge and experience to repair electronic devices. For the vast majority of customers, visiting a professional repair provider … is the safest and most reliable way to get a repair.”

Though Apple’s exact prices have yet to be announced, Figueroa estimates that for most consumers, it will still be safer, more cost effective and faster overall to visit a third-party repair shop than to buy the tools, parts and repair manuals. And not to worry, folks: he’ll still be there, even if Keys residents botch their first attempts.

“In the end it’s probably better for me,” he said, laughing. “They’ll come see me and I’ll have to undo whatever they did.” IN PICTURES: A SNEAK PREVIEW AT THE NEW ITALIAN FOOD COMPANY IN ISLAMORADA 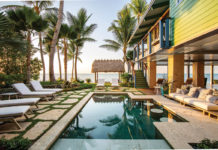 LOSE YOURSELF IN THESE LANDSCAPE DESIGNS – HOME & GARDEN MAGAZINE