Cosmically speaking I am compelled to wish you not just a happy New Year but a happy New Era. Power-couple planets Jupiter and Saturn have set up shop in freewheeling, air-dwelling Aquarius. And my stars, we are all in sore need of that fresh air. As the smoke clears, let us remember that life is both beautiful and brutal and time the only currency. In this new year and in each new day, recall the meditation of Hermann Hesse. Eat well, shout your song, bow to the rising sun of the never before and the setting sun of the never again.

This month you may feel pressed between what the heart wants and what the grindstone demands. With Mars and Saturn at odds, swinging wildly toward whim or callously toward ambition will cost you. Schedule time for indulgence and duty in equal measure.

With Mercury, Saturn, Jupiter and the sun moving through your sign this month, the age of Aquarius is nigh indeed. Like the mythical Ganymede who fed drinking water to the gods, you have an offering to make. Whatever project you can propose or wisdom you can bestow, the time to share what you have, or hope for, is now.

Nobel Prize-winning author and fellow Pisces John Steinbeck wrote, “In uncertainty I am certain that underneath their topmost layers of frailty, men want to be good and want to be loved. Indeed, most of their vices are attempted shortcuts to love.” May these words inspire compassion toward the frail wantings and bumbling shortcuts of others and move you, when it comes to love, to take the ever seeking, long way around.

Singer, scarf collector and fellow ram Steven Tyler says, “The things that come to those that wait may be the things left by those that got there first.” Impatience is your birthright, Aries. Direct your enthusiasm full stop at whom and what you want. Be the first to the feast of your own life.

Famed speaker, writer and Taurus Jiddu Krishnamurti writes, “One is never afraid of the unknown; one is afraid of the known coming to an end.” This sentiment will resonate, Taurus, as you challenge long held conceptions of yourself as predictable and predictably obstinate. Uranus, planet of rebellion and upheaval, finds you breaking free and acting out in ways that will confound, and even frighten others. Now is the end of who you were and the beginning of the wild unknown of who you might yet be.

Famed psychoanalyst and fellow Gemini Erik Erikson believed into late adolescence that his stepfather was his biological father. Erikson marked his moment of paternal revelation as one of deep confusion and betrayal. As an adult, he developed the theories of identity crisis and life-stage virtues. Remember, Gemini, we heal ourselves not through quick doses or one-time cures, but through a lifetime of investigating and unlearning ourselves and our suffering.

A new moon in Capricorn and the alignment of Jupiter and Uranus activate/instigate intimacy and communication for you crab folk. The focus is on truth telling, revealing your own and creating space safe enough for others to entrust you with theirs. Your tactics of manipulation, emotional withholding, silent treatments and subtle psychological warfare have no place here. Lay your cards on the table. It’s the only game worth playing.

Actress and fellow lion Kate Beckinsale is one of very few marksmen who can fire a shot without blinking, a metaphorical reminder to you, Leo. You are courageous enough to face the shock and jolt of life with fierce curiosity and open eyes fixed upon what lies ahead.

January ends the arduous journey of Mars through your intimate, shadow-ruled eighth house. Since the summer’s solstice you’ve been cutting your teeth on the rough edges of your own heart. You’ve been plumbing emotional depths, old fears, childhood wounds and the fresh pain of recent triggers. The stars are shifting and you are living in the sun again, buoyed by gratitude born from time spent in the dark.

The past few months have made for a season of separation for you, Libra, one of literal or metaphorical isolation, neither of which is a natural place for your sociable self. Aquarius season will illuminate your fifth house of play, which rules wonderment and the unapologetic pursuit of good times and glad rags. Your time alone has prepared you for this walk in the park and hopefully, imbued you with the knowledge that you require no companion to reap the reward of joy. You are company enough.

This month’s new moon in Capricorn marks the beginning of a new cycle of communication for you, Scorpio. Cultivate a gentler approach to internal dialogue. Speak to and about yourself with reverence. Hush the voice that urges you to criticize rather than create and react instead of reflect. It will fast become a grace you give to others.

Guitarist, hedonist and fellow Sagittarius Keith Richards writes, “To me, life is a wild animal. You hope to deal with it when it leaps at you.” Have the low howls and bared teeth of life been having their way with you, archer? The best way to approach all wildness is not to fight, but to follow. Luck is on your side so long as your mind is hungry and your footsteps light. 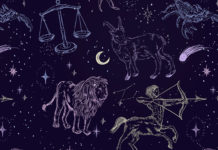