The Chart Room, located at Pier House Resort, is the quintessential bar where the booze-fueled history is so lengthy and interesting not one drunk storyteller could tell it all.

The Chart Room Bar is like the cool kid you remember from high school. Whether or not he got the prom queen or threw the best parties, all of the wildest stories are attributed to him. So it’s impossible to tell if — back in the day — Bob Marley played the Chart Room, or grief-crazed degenerates snorted their buddy’s ashes off the bar. We can be sure that Ernest Hemingway never drank there (a physical impossibility) and someone, somewhere, remembers something but we’ve yet to track down the hard evidence (which might be a good thing).

Only in Key West could a hotel-room-turned-bar become one of the most long-standing, story-filled, dim-lit, cherished places on the island. When David Wolkowsky, famed local visionary and developer, was told his resort needed a place to drink, the quick fix was to empty out a hotel room and add some booze and a mahogany bar. That was all Key Westers and celebrities needed, a place to hide from the sun, in the 1960s.

Chris Robinson, owner of Big Kahuna Charters, was a bartender there in the 1970s and called it an “eye-opening experience.” At 25, he served drinks to every important political and municipal figure in town.

“Key West was run out of there,” Robinson said. “You could get anything fixed — arrests, bonds, parking tickets, even a building permit. Anything short of murder, and I could get it taken care of.”

Back then it was mostly a day bar, a place for the mayor and commissioners, fire and police chiefs, state and local attorney generals and future celebrities.

When Jimmy Buffet began his career at the Chart Room Bar, it was to an audience of Hunter S. Thompson, Tom Corcoran, Tom McGuane, Jim Croce, and singer Jerry Jeff Walker (Mr. Bojangles). It was a time when no one was famous and drinking was a sport. Also, the first ocean power boat races started at the Pier House, sponsored by Hennessy cognac. The boats raced to the Dry Tortugas and back while all the “spectators” waited at The Chart Room.

“Drinks were $1.25 and I made a thousand dollars in one day,” Robinson said, launching into a story about another bartender, Phil, and his untimely end — on the run from the law and out of state. Jimmy Buffett’s song “A Pirate Looks at 40” is widely thought to commemorate Phil, and rumors persist to this day about what exactly happened to his ashes (see the first paragraph).

Regardless, it was this episode, or reported episode, that probably gave rise to the practice of embedding the regulars ashes into the bar itself. Up and down the bar, holes have been drilled into the countertop, ashes spooned in, and the openings corked. A plaque next to the cremation niche honors the dead. Most famous is Mel Fisher who charted his search for the Atocha at the old spool table. Commander of the Conch Republic Army Geoff Chapman, who celebrated the secession from the union regularly at the Chart Room Bar, also arranged to leave a bit of himself behind. So did Bob — no one really knows who Bob is — and James “Whistle” Cox and Panamah Peat. There’s a hole already drilled for Che Kohen, founder of the Rowdy Dinner Club, Chartroom’s Gentleman’s Club and Occasional Choir. The Weekly left him a note at bar, but he hasn’t returned the call, yet.

Back in the day, locals scoffed at margaritas. During the Chart Room’s “Classless Summer of ’72,” tequila gimlets were served with fresh Ley lime in a brandy sifter — no mix or salt in sight.

Full of pictures, memorabilia, and maybe an undiscovered hot dog or two, The Chart Room emblematizes Key West’s history of long tales, good times, and some things better left unsaid, or at least attributed. The stories continue to circulate — whether true or flagrantly embellished — about the friendships forged, stars born and the entire city’s brazen history. All this, from a converted-hotel-room-turned-bar. 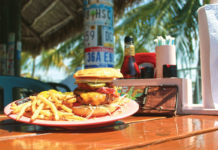