A windfall of grant funding should help to accelerate the timelines on planning and construction for two anticipated attractions in Marathon.

The city of Marathon applied in 2018 for two grants through the program to purchase the Quay and old Salty’s properties, but was originally informed that it missed the award by one place. With the previous recipient’s withdrawal from FCT’s program, the city will now receive a $1,488,000 grant to cover purchase and construction costs at Salty’s, with an additional $944,800 dedicated to the Quay property. Since the city has already purchased both landmarks, the value of the two properties will serve as Marathon’s matching funding for the grants.

According to Covelli, the new awards should greatly accelerate the city’s ability to move forward with planning and construction at both sites.

“Very much so,” she said. “We were still waiting on grant awards to be announced, so it wasn’t even a sure thing for the ones that we had submitted.”

Combined with a potential grant from the Monroe County Tourist Development Council, the city’s preliminary plans are to use the funds for replacement of the finger docks at the Salty’s marina, which will subsequently be leased to local charter captains. Also on deck are a renovation of the property’s historic trading post, a storage area for captains using the marina, and a station for the new Pigeon Key trolley, scheduled to be operational within a month.

Meanwhile, the Quay property will look to move forward with a slightly modified version of the design dubbed “Bay 54,” chosen by Marathon residents in a vote last August from three designs for the property submitted by local D’Asign Source developers.

Though its purchase came much later, public works and engineering director Carlos Solis said the scope of work necessary at the Salty’s property means it could be finished and operational sooner than the Quay redesign. Installation of a sidewalk and utility conduit as well as parking lot grading is scheduled to start within days to allow for Pigeon Key’s trolley operation in the lot. With a remodeling plan for the building currently in the works, Solis hopes to have the project out for bid within the next four months.

The Quay property, on the other hand, is largely limited by the condition of its seawall, which Solis says will need serious repairs or replacement.

“The fact that we got the money pushes it back to the front burner where we can start working on it. You’ll probably see something in terms of design or something and within the next year, you’ll see activity going on out there.”

Solis said the Quay project is estimated to cost $1.5 million to $2 million, the majority of which will go toward replacing the seawall. The park’s development will largely be determined by the permitting process for replacement of the seawall, which requires coordination with multiple agencies including the Florida Keys National Marine Sanctuary and Army Corps of Engineers. 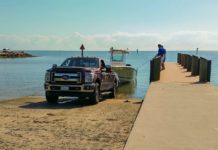